Make It Right Stands Up (Sustainably) to Hurricane Isaac

Board At Work: Lower 9 CSED Holds Its Annual Board Retreat 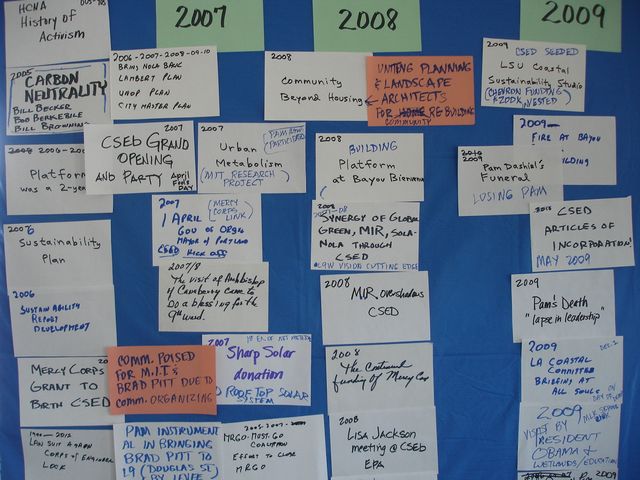 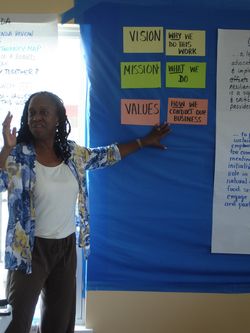 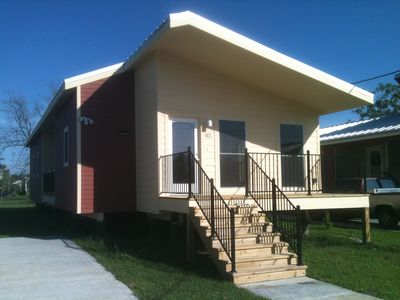 CSED's Board of Directors gathered Saturday, June 23 in the Lower 9th Ward for its annual Board Retreat - to review the CSED journey and plan the organization's future in helping the community achieve its sustainable recovery and restoration. Leading the Board through this important process was Erness Wright-Irvin (left), MHA, of New Orleans and the Facilitative Leadership Institute. Our venue: one of the Make It Right houses at 1627 Reynes Street - a perfect setting for the day!

Interesting piece just out in Canada's Alternative Journal about the Make It Right Project in the Lower 9th Ward. Also, check out the link to the Alternatives podcast, featuring an interview with the author.

As we cross over the Claiborne Avenue bridge from the Upper Ninth Ward on Gray Line International’s “Hurricane Katrina – America’s Greatest Catastrophe” tour, local artist Brad Dupuy informs us in his rich voice that we “are about to enter what is known famously as the Lower Ninth Ward.” What makes the Lower Ninth Ward notable, at least for Gray Line and the rest of the world, is that this is where Hurricane Katrina hit the hardest. According to Dupuy, the Lower Ninth “saw a tremendous amount of media attention largely because this is where you would have seen our highest numbers of fatalities, where you would have seen the high- est numbers of people in need of being rescued from their properties.” It is also the place where the most people lost their homes when the levees broke in August 2005.

Looking north from the Claiborne Avenue bridge, we can see the spot where the Industrial Canal levee breached, flooding the Lower Ninth Ward. In all, 4000 homes were lost in the Lower Ninth. As we tour the area in 2008, most of the debris has been cleared and all that remains are a few brick houses scattered amongst the skeletal foundations of countless others. Katrina virtually wiped this neighbourhood away, literally knocking houses off their foundations.

The bus turns in to what was once a neighbourhood near the levee, and we are greeted by the remains of brilliant pink canvas structures. They were part of an art installation called The Pink Project. Dozens of tent-like buildings had dotted the landscape, denoting the spots where houses once stood and, presumably, would stand again. Our guide informs us that superstar Brad Pitt and the Make It Right Foundation had launched The Pink Project a few months earlier. As we drive by Common Ground Relief, a non-profit foundation that initiated the gutting of houses in the Lower Ninth and assisted residents after the flood, a sign greets us: “TOURIST Shame On YOU. Driving BY Without Stopping. Paying TO See MY PAIN. 1600+ DIED HERE.” My companions and I take some solace in the fact that, despite taking part in America’s Greatest Catastrophe tour, we aren’t really tourists. It’s reading week in Canada and our group of university students has come down to help out by giving media support to Common Ground Relief. We’re volunteers and we are staying in the thick of things where Make It Right homes are going to be constructed.

Thom Pepper, the operations director for Common Ground Relief, tells us excitedly about how Pitt’s Make It Right, in collaboration with community stakeholders, is planning to build 150 new, LEED-certified homes in the seven-block area next to the levee. Make It Right has tracked down 90 of 150 property owners, and 75 are interested in having new homes. Even from our bus, we can feel the hopeful enthusiasm that pervades the air. It will take more than the biblical three days, but this part of the Lower Ninth Ward, it appears, will rise again.

Before Katrina, there were two views of the Lower Ninth Ward: that of the general public and that of residents. READ MORE >>

The Make It Right Foundation was started by Brad Pitt, who wanted to help the residents of the Lower 9th Ward rebuild their community in the wake of Hurricane Katrina. Instead of rebuilding using conventional methods, Pitt asked William McDonough to apply his Cradle to Cradle approach to create a new set of sustainable homes. The primary goal is 150 affordable, green, and storm-resistant homes. How far has Make It Right progressed towards its goals?

Make It Right was founded by Brad Pitt, William McDonough + Partners, GRAFT, and Cherokee. At that point, they were a little discouraged by the progress in rebuilding the Lower 9th Ward. This was two years after Katrina. So they collectively decided that sustainability should be dedicated more towards folks that need it, that affordable sustainable houses could have a much bigger impact. We set the goal of 150 homes. Right now, around three years out from project conception, we have approximately 50 houses completed and 30 houses under construction, all of which are under the LEED Platinum umbrella. We decided to strive for and reach that level for every home. This current build of 30 homes will be wrapped up mid-to-late February. We are then going to go through another round of analysis and value engineering to see how we can increase the affordability even further, without taking anything out of the systems of the house, the neighborhood, or the landscape.

In addition to creating an affordable, sustainable, and safe set of homes, Make It Right also aims to re-conceive the role of landscape architecture in post-disaster rebuilding. A pilot of the Sustainable Sites Initiative (SITES), the Lower 9th Ward site aims to become an “innovative site sustainability platform.” What is this? How will the new site design model help mitigate against floods and storms while ecologically managing onsite water? How far along are you with these plans?

Because Make It Right is not a developer, we’re simply building individual homes for folks that lost their homes during Katrina. We didn’t have the luxury of doing a comprehensive master plan. We had to look at the individual residential lots to see how far we could push the envelope of sustainability while still making them socially and economically sustainable. That said, addressing the site sustainability at each and every house led us to a bigger opportunity with the city’s Department of Public Works. We have been developing extensive low impact development strategies such as pervious concrete, rain gardens, rain barrels, and sub-surface water storage. Our landscape gets 65-plus inches of rainfall a year and the city of New Orleans still spends several million dollars pumping water over the levy. Our goal is to create a series of streetscapes that would invest in the public realm as opposed to just simply adding in a bigger pipe and a bigger pump. READ MORE >>


New Orleans, Louisiana, was the third stop on our month-long search for inspiration across the country. Five years after Hurricane Katrina, NOLA has undergone dramatic change – the city’s population, which fell to 50% post-Katrina, has returned to nearly 80%; and the number of those living below the poverty line in Orleans Parish (which encompasses New Orleans) has dropped by 68,000. But as many institutions, experts and NOLAers are quick to point out, this revitalization is a result of factors beyond systemic improvement in the city’s ecology and economy. While new money, businesses and residents have helped pave the road to recovery for New Orleans, much of the population and history that were lost in Katrina will never return. The city’s growing numbers are made up less of returning and original NOLAers than new (and for the most part, wealthier) transplants. Many of the residents displaced by the storm remain so indefinitely, and the neighborhoods devastated five years ago still stand largely blighted, reclaimed by the wilderness that once grew around them.

Adding to the palette of the Lower 9th are the bright, starkly modern Make It Right homes. To this date, the Make It Right Foundation (founded by Brad Pitt) has built 50 sustainable, affordable housing units to serve the families affected by Katrina. The houses were concepted with safety, eco-responsibility, and design in mind – all are storm-safe, solar-powered, and follow Cradle to Cradle thinking. The creations of more than 20 top-name architects and firms (GRAFT, Thom Mayne), the houses range in size, color, and form. But despite their diversity, all are dramatic departures from the traditional architecture (and some would say, culture and heritage) of New Orleans – a fact that strikes some as problematic. READ MORE >>

As I strolled along Tennessee Street in New Orleans at dusk earlier this month, I saw neighbors chatting on shady porches and a few friends drinking at a picnic table under a house set high on stilts.

Five years ago, after Hurricane Katrina struck, a wall of water burst through the Industrial Canal levee just west of Tennessee Street in the city’s Lower Ninth Ward, and blasted 4,000 homes into kindling. A barge tumbled through the breach and lay at a crazy tilt just yards away from where I walked.

Now, almost 50 colorful houses with bat-wing roofs and louver-trellised porches have been built or are in construction. They are the most cheering emblem of a city where hundreds of thousands have returned yet full recovery and drivers of future growth remain elusive. READ MORE >>