Reporting from Venice, La. — On an unseasonably warm winter morning, Earl Armstrong Jr. eases his airboat out of the slip, past a fishing crew hacking up a shark on the pier and a canal strung with hunting camps on stilts, into the broad waters of West Bay.

Armstrong, 67, kills the airboat's engine and, looking around, remembers a place nothing like this one.

"You couldn't travel through here before by boat," he says, looking at the vast water broken by a couple of small, grassy islands. "Used to be woods here when I was little, that's how thick it was. The grown-ups used to scare us by telling us there were tigers and lions up in here, but we came anyway.

The sea took the forests and marshes of West Bay, leaving mostly open water, as it has along hundreds of square miles of Louisiana's coastline over the last century. But now Louisiana may be about to embark on a highly ambitious project to keep its coast from slipping further underwater, and even restore some of it. READ MORE >> 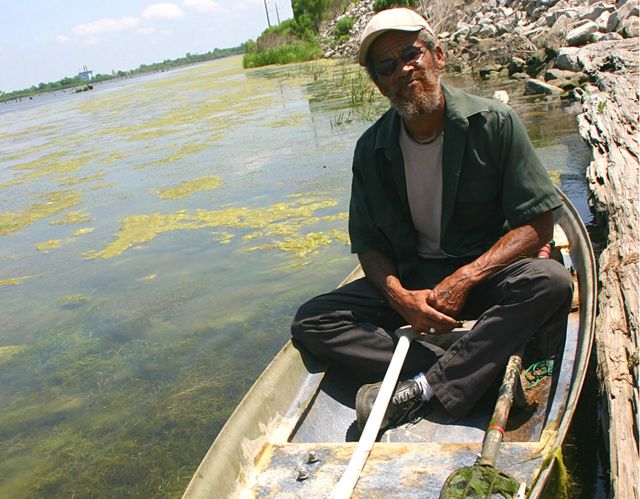 John Taylor was ten when he first explored Bayou Bienvenue in New Orleans.

"What I found was a special place; the bayou was full of plants and animals to learn about and quiet spots to think in," recalls John, a volunteer with the Sierra Club Environmental Justice Program in Louisiana.

"I've spent the last 50 years visiting the bayou near my home in New Orleans' Lower Ninth Ward, and every year it disappears a little more - today, what was once a healthy cypress forest is now just open water."

John said it wasn't until Hurricane Katrina that he and others fully realized how the bayou had changed over the years. With the bayou's forest gone, Lower Ninth Ward residents and property were exposed to the storm’s full fury of rising flood waters that left lasting devastation.

Then only a few years later, the BP oil disaster set in motion a chain of events that further damaged Louisiana and the Gulf Coast's coastal marshes and waters.

John's New Orleans neighborhood continues to work to restore Bayou Bienvenue as other communities throughout the Gulf struggle to recover from the devastating impacts of the spill, all while BP continues to enjoy record profits. READ MORE >> 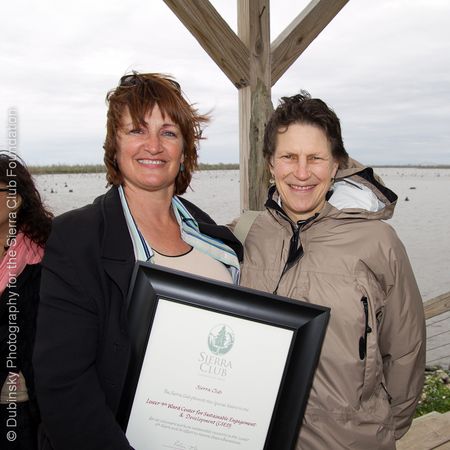 What a thrill it was for CSED to be recognized by an organization as well known and well respected as the Sierra Club. And it was an honor and delight to not only meet Michael Brune and Robin Mann but the board members of both the Sierra Club and the Sierra Club Foundation as well. The highlight for me was receiving the award out on the Bayou Bienvenue Triangle Platform where so many events, press conferences and influential people have gathered. This platform, built from the desire of the community to be reconnected to the water, shows how great collaborations can bring a project to fruition in situations where very little progress was originally anticipated. In partnership with the Sierra Club, the University of Wisconsin biology students, University of Colorado at Denver design students, Common Ground volunteers, CSED staff, residents and local carpenters, this platform has become a symbol of the ‘can-do attitude’ of one small community. Used daily by residents and visitors alike, the platform is a vital link for our community to the wetlands that border our neighborhood.

If you have not been to this special site within the Lower 9th Ward, it is located at the end of Caffin and Florida Avenue. If you come early in the morning you may, by chance, run into local resident John (Swamp Red) Taylor. John not only maintains the site for CSED but he is an endless wealth of knowledge about the wetlands and how it used to be when he was a coming up. 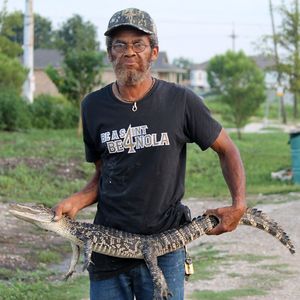 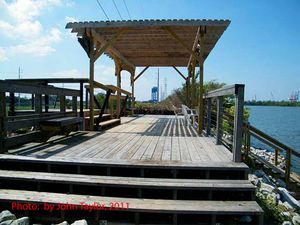 NYTimes: Calculating the Carbon Value of a Swamp

A nonprofit organization and a Gulf Coast electric company have come up with a way that might raise money to help protect New Orleans and surrounding areas from storms made worse by climate change – by collecting funds from people who feel bad about their carbon dioxide emissions.

The American Carbon Registry of Arlington, Va., runs a market for carbon credits. It has established methodologies for calculating how much carbon dioxide a certain positive action will sequester – planting an acre with trees, or burning methane from a landfill that would otherwise leak into the atmosphere, for example. It issues carbon credits with serial numbers, and if those are sold on a voluntary market to an organization that wants to reduce its carbon footprint, it records that fact and retires the serial number.

The idea, said Mary Grady, the organization’s director of business development, is to give buyers confidence that the credit really does represent a ton of carbon dioxide that is not emitted, and has not been counterfeited, or sold more than once. Without some verification, she said, “you don’t know how good it is.”

On Wednesday, the carbon registry group announced that it had published a proposed methodology for calculating the benefit of restoring wetlands on the Gulf Coast. The number of tons of credits that would be generated by an acre would vary according to the type of wetland – saltwater, fresh water, mangrove, cypress or something else.

The proposed standard is now available for public review, as if it were a proposed federal rule. The whole point, in fact, is to mimic what the group believes the government ought to be doing — establishing some kind of cap-and-trade system for emissions of global warming gases. READ MORE >>

By Mark Schleifstein, The Times-Picayune

Declaring Louisiana’s loss of coastal wetlands “nothing short of a national emergency,” state officials today released a $50 billion, 50-year strategy for rebuilding land and increasing protection from storm surge for coastal communities that they say can be paid for with money the state is reasonably sure it will receive.

The strategy is outlined in the Coastal Protection and Restoration Authority’s draft five-year master plan update, which for the first time contains maps showing the location and scope of proposed projects and maps showing what the state’s coastline will look like in 2061 if they’re built. Lists of the projects also show their cost.

The master plan was made available on the Web Thursday  at noon at www.coastalmasterplan.la.gov.

Also included is a map showing the wetlands loss that will occur by 2061 if the master plan isn’t implemented and the extent of flooding from storm surges that will accompany a 100-year hurricane in 2061 if the projects aren’t built.

The document makes clear that some smaller coastal communities, and some segments of rapidly eroding coastal wetlands, will be losers in the expensive race to restoration. READ MORE >>

Read through the entire draft plan below:

An interactive postcard, created by M&C Saatchi Switzerland for The New-Orleans based Gulf Restoration Network, is aimed at giving the recipient first hand experience of the situation that remains in the Gulf of Mexico, over a year after the major oil spill there from the Deepwater Horizon rig.

On Nov. 10, the City of New Orleans and St. Bernard Parish broke ground on the important and innovative $10 million Central Wetlands Assimilation Project. On hand for the ceremony were New Orleans Mayor Mitch Landrieu, St. Bernard Parish President Craig Taffaro, members of the New Orleans Sewerage and Water Board and approximately 75 others representing community organizations, environmental non-profits and other interested parties. All agree the project is a critical first step towards restoring the entire Central Wetlands Unit, mitigating historical impacts of the Mississippi River Gulf Outlet (MRGO) channel, improving fish and wildlife habitat, and creating new jobs in restoration and ecotourism.

The Central Wetlands Assimilation Project is a vital step to restore impacted wetlands in the Central Wetlands Unit, a 30,000-acre area east of downtown New Orleans, containing open water that was once a thriving cypress forest just over the levee from urban communities like the Lower 9th Ward and Chalmette. READ MORE >>

Cypress swamp near Lower 9th Ward will be restored as hurricane defense | NOLA.com 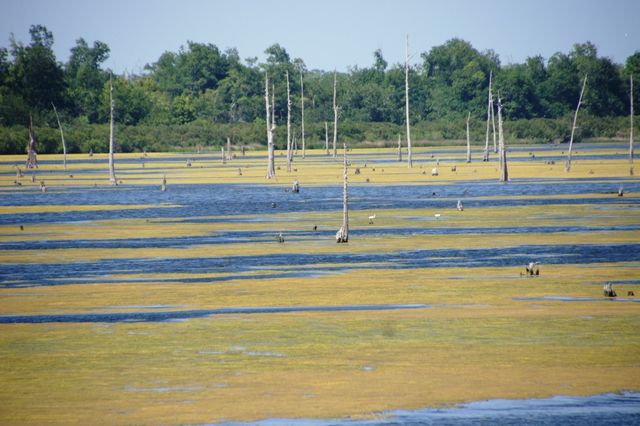 Local leaders announced Thursday the beginning of a project to restore a key area of cypress swampland near the Lower 9th Ward, an effort they called essential to protecting the metro area in the event of another major hurricane.

Swinging shovels full of dirt, New Orleans Mayor Mitch Landrieu and St. Bernard Parish President Craig Taffaro said the eventual restoration of the 30,000-acre triangle of the once-vibrant Central Wetlands will be part of the several lines of defense that will keep the area safe from storm surge.

The project, first proposed by the Sewerage & Water Board's environmental affairs division, is being built by the water board and St. Bernard Parish.  The first phase, which will restore 2,300 acres, will cost $10 million and will be paid for by the federal Coastal Impact Assistance Program, which is financed by offshore oil revenue. Another $30 million will be made available to expand the effort in the next few years.

“This is one of those bright spots where governments join together, crossing parish lines in Louisiana, and do something good for the public, good for the future of all of our communities,” Taffaro said.

“It really sends a message to the rest of America that its critically important that we rebuild all of Louisiana, all of New Orleans, all of St. Bernard because we all have common threats,” Landrieu said. READ FULL ARTICLE >>

The latest in a documentary series from the Gulf Restoration Network – this time, a discussion of the Mississippi River Gulf Outlet (MRGO) and its impact on greater New Orleans as a “hurricane highway” allowing storm surge into St. Bernard Parish and the Lower 9th Ward after Katrina.

How to Re-Engineer the Louisiana Coast

For eons, the Mississippi River meandered across its low-lying delta, leaving fertile deposits of sand, silt and nutrients. For the past two centuries, however, engineers have tried to tame the waterway by raising levees to prevent flooding, straightening and deepening channels to aid navigation, and building complex control structures to regulate flow. Now, instead of spilling over its banks during spring and summer floods, the ­river and its precious cargo of sediment jet straight into the Gulf of Mexico, starving the coast of life-giving soils.

As a result, 1875 square miles of wetlands vanished in the 20th century. Marshes fell apart like rotting cloth. Beaches drowned. Open water winked in the sunshine where crops once grew. Experts estimate that in the first half of the 21st century another 673 square miles will be lost.

To restore the ravaged coast, scientists, engineers and conservationists are lining up behind a slate of engineering projects, including dredging that will move tons of sediment through miles of pipeline, and local programs to hand-plant marsh vegetation stem by stem. None, however, seem to hold as much promise as large-scale river diversions. Or generate as much controversy. READ THE FULL ARTICLE >>