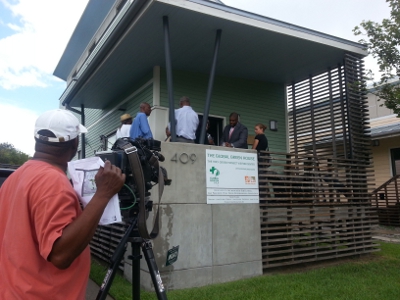 In the more than eight years since Hurricane Katrina, not one affordable rental housing development has been built in the Lower Ninth Ward. On Wednesday, September 11, 2013, the Louisiana Housing Corporation, formerly the Louisiana Housing Finance Agency, yanked approval from the only project proposed for the Lower Ninth Ward. Families, elected officials and advocates are fighting back!

Global Green USA, in partnership with Greater New Orleans Fair Housing Action Center, Councilmember Stacy Head, community leaders and residents joined together for a press conference at the site of the Holy Cross Project to stand our ground for affordable housing in the Lower 9th Ward.

JW Tatum, Board Member for the Lower 9th Ward Center for Sustainable Engagement and Development, shared his experience of gathering friends in his home under candle light after Hurricane Katrina, to make plans to rebuild his Lower 9th Ward community. READ MORE >>

The Trumpet Returns to the Lower 9: Art, Life, Nature and Recovery

The March/April 2013 Trumpet once again shines the spotlight on the Lower 9th Ward: with features on Art in the 9, Food Security, restoration of Bayou Bienvenue, the Lower 9th Ward Village and so much more! Be sure to read this great issue!

Congrats to Global Green on beginning another important phase of the Holy Cross Project in sustaining the Lower 9th Ward! 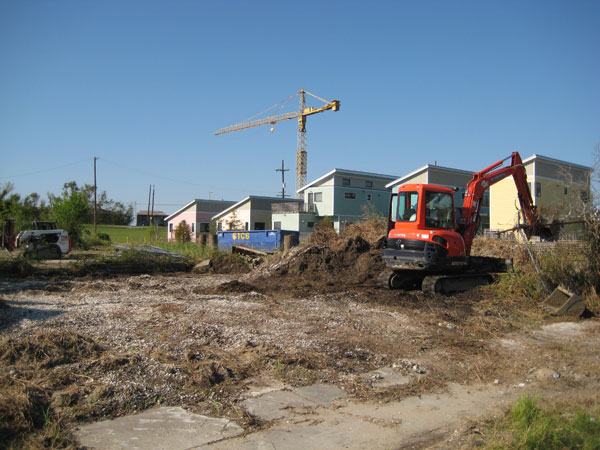 "After a lot of elbow grease and extraordinary efforts, we finally broke ground on our Community Development and Climate Action center in the Lower 9th Ward of New Orleans. When I visited last week, the site was busy with bulldozers, pile drivers, and other tell-tale signs of construction. This signifies the next step in our building of our Holy Cross Project, a sustainable village in one of the neighborhoods hardest hit by Hurricane Katrina.

Just over six years ago, this was an empty 1.3 acre site (home to an orphanage over 100 years ago) in the Holy Cross neighborhood. Soon it will be an 8000+ square foot facility that will educate the public through our visitor’s center and offer other important services for the neighborhood. It is part of the vision I put forth for Global Green just after Hurricane Katrina in 2005 — to adopt a neighborhood, among other important goals, and ensure the green rebuilding of New Orleans. Now, with four of the five homes sold and occupied (the fifth one remains open to visitor’s center until the community center is completed), and the community center under construction, we are well on our way, but we still need your help." READ MORE >>

Congrats to Global Green on 4 out of 4: completing the sale of another new, affordable green home in the Lower Ninth Ward! Welcome to the neighborhood!

The last of the four Holy Cross Project houses we put on the market sold today. Proud new owner Gary Williams has the keys to 417 Andry Street and will get a front row seat to watch the community center construction progress from his back porch. Welcome to the neighborhood, Gary! READ MORE >> 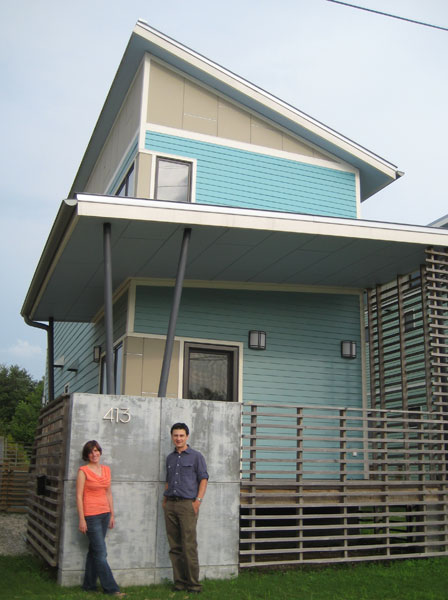 Shannon and Laney French (left) are the proud owners of the first Holy Cross Project house we sold in New Orleans.

They purchased one of five LEED Platinum houses we built in the Lower Ninth Ward of New Orleans, the neighborhood hardest hit by Hurricane Katrina. Three more of the homes we built are on the market; we continue to use the fifth as a visitor’s center and expect to break ground soon on a Community Development and Climate Action Center.

From our friends at Global Green: 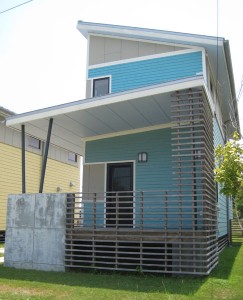 Signed on the dotted line! We closed the sale of our house at 413 Andry Street in New Orleans yesterday and handed keys over to the French family. This is one of five LEED Platinum houses we built in the Lower Ninth Ward of New Orleans, the neighborhood hardest hit by Hurricane Katrina.

Three remaining homes are on the market and the fifth is being used as a visitor’s center. All are part of the Holy Cross Project we began following Katrina — as part of our plan to help New Orleans rebuild green six years ago, we committed to helping the community with a project to build sustainable homes and a community center. Next, plans to break ground on the next phases to include a community center and additional housing. Stay tuned for news in the coming months.

Green, affordable: the Holy Cross Project houses are up for sale!

From our friends over at Help Holy Cross & the Holy Cross Neighborhood Association:

At last, the sustainably-designed and -built homes at Global Green's Holy Cross Project (corner of Douglass & Andry) are on the market! Holy Cross Neighborhood resident and realtor Marna David is working with the non-profit organization to see these wonderful properties on the levee. Here's what she says:

"Four of Global Green's 21st Century Shotgun Homes are ready for sale and you could call one of them home. Two are single story, two are two-storied and all are economical in their use of space and energy. The open floor plans provide a feel of spaciousness. Give yourself the double pleasure of living in one of the first LEED Platinum rated homes in New Orleans, and, at the same time, take in the park-like levee every time you look out your front window. With solar panels, ENERGY STAR appliances and applied green building techniques, these unique homes offer some of the most affordable and enjoyable living to be had. Come sit in one of these houses for 10 minutes and feel the difference that a people-friendly, non-toxic environment can offer. And. Call the energetic Historic Holy Cross Neighborhood home!" On the morning of October 28, Global Green USA proudly partners with The Idea Village to present a Clean Energy/Green Economy Forum at historic Kingsley House in the Lower Garden District.This event will mark the next step in our work to help create a sustainable economic and environmental future for the region. We will introduce the 2012 Water Challenge entrepreneurial class, which The Idea Village is managing with the support of the Greater New Orleans Foundation, and will host a dialogue on clean energy and green businesses that are investing in the region with business leaders from throughout New Orleans and the Gulf region. Participants will explore how to help attract and incubate green businesses and economic opportunities in cities along the Gulf Coast, and engage in discussions of model policies and local success stories, including Stion Solar, Golden Leaf Energy, Green Coast Enterprises, and Free Flow Power.

Green Forum registration is $50, with discounted registration of $25 for non profits. Interested in attending? Please visit our website here: Green Forum for more information and to purchase tickets. RSVPs requested by October 24th. Join us and support Global Green in New Orleans!

Reinvention 2010: What architects have learned from rethinking and rebuilding in New Orleans

The third and final day of Reinvention 2010 began with a panel of New Orleanians discussing the city’s rebuilding efforts. Byron Mouton, AIA, noted that “since the storm, there’s been more willingness to try things in a different way.” He showed two residences by his firm, Bild Design, as well as projects by the student design/build program he directs, Tulane URBANbuild. A main local concern, he said, is figuring out “how we move away from the earth while maintaining some connection with the neighborhood.”

Wayne Troyer, AIA, presented several projects that aim to improve local communities and work within the city’s built context. These included a 3-acre mixed-use project, an adaptive reuse of an old mill building, and the rebuilding of a fraternity house in the Uptown neighborhood. A net-zero, mixed-use project that provides job training and a small housing component will be ready for the American Institute of Architects’ national convention in spring 2011. Architect and developer Marcel Wisznia, AIA, showed a series of the multifamily, mixed-use projects he’s been able to put together by navigating the byzantine systems of federal and state tax credits for historic preservation and alternative energy. “The common thread here is pre-Katrina and post-Katrina, and that’s really how we live our lives,” he told the audience.

Steve Dumez, FAIA, of Eskew+Dumez+Ripple, said his firm was beginning to “rethink a way in which we can develop a more significant connection back to the water … more like the Dutch model of connectivity to the water’s edge.” He pointed out that “Katrina, for us, has been transformative. Katrina was not a natural disaster. It really was a failure of imagination and a failure of design, and it’s our responsibility as locals to do everything we can to get it right this time.”

“One of our major goals is to understand the concept of innovation and replication,” said Tim Duggan, a landscape architect with Brad Pitt’s Make It Right Foundation. He noted the different building methods the foundation has been trying and also the green landscape techniques used throughout the Make It Right project, which so far has built 52 houses in the Ninth Ward neighborhood. Policy associate Linda Stone of Global Green presented her organization’s Holy Cross neighborhood project containing five houses, a multifamily building, and a community center. READ MORE >>