Today on NOLA.com: Makin' groceries in the Lower Nine 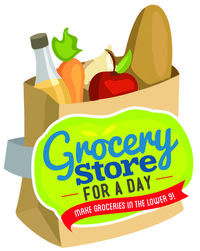 Running out for a pint of milk is a pretty hard thing to do if you live in one of New Orleans’ “food deserts.” And forget about buying any fresh fruits or vegetables.That’s not going to happen if you live in the neighborhood below the Bywater.

But, now, seven years after Katrina, the folks in Lower Nine, tired of traveling nearly four miles into another parish to “make groceries” are organizing together and researching better options. They want to shop in their neighborhood and in their parish. And while that has historically meant going to a traditional grocery story, they’re flexible about even that.

“We could look at a food co-op, or healthy corner stores, even a mobile grocery store,” says Jenga Mwendo, food security coordinator with the Lower Ninth Ward Center for Sustainable Engagement and Development. Those ideas are the results of a series of meetings begun in April 2012 to allow the community to decide for itself what it wants in its neighborhood. Now, the recently-organized Lower Ninth Ward Food Access Coalition has decided on an action to demonstrate that they are serious. But, as with so many events undertaken by New Orleanians, this demonstration will be different. READ MORE >>

Listed below are links to weblogs that reference Today on NOLA.com: Makin' groceries in the Lower Nine: