« Connect the 9: Bridging St. Claude for All Users (PRESENTATION) | Main | Join Us Today! Learn more about the Lower Ninth Ward Waterfront Project: 6 p.m. at L9 Center for the Arts » 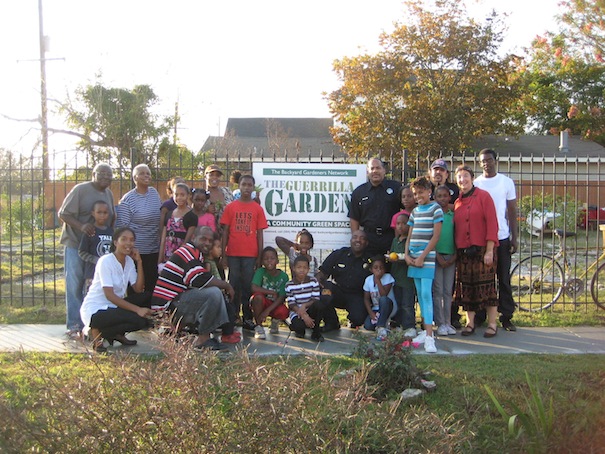 Recently the New York Times Magazine ran a story on my home, New Orleans’ Lower Ninth Ward neighborhood, titled “Jungleland”. The article, written by Nathaniel Rich (who claims to be a resident of New Orleans), paints the Lower 9th Ward as an untamed mess of overgrowth. He describes our neighborhood as a forgotten wasteland, where few have attempted to bring order and where the residents seem resigned to the wilderness. He highlights the City’s futile attempts to beat back the endless brush, but doesn’t give half as much mention to the overall lack of government support given to the neighborhood both before and after Hurricane Katrina. Needless to say, this article got under my skin. Although it's taken me a while (I'm not a journalist, and I'm balancing two jobs and single parenting right now!), I'm finally writing a response.

Yes, many parts of the Lower 9th Ward are overgrown and neglected. (And many are actually not, a fact Rich fails to mention.) But a more thorough story, and the story that we actually NEED told, is HOW and WHY this happened. The city, state and federal government basically left this population out to dry.

Millions of dollars have flowed into New Orleans, on the tragedy that was magnified internationally using the Lower 9th Ward as its poster child. And yet, nearly seven years later, the money that poured into New Orleans (and into immediate repairs of the French Quarter and other areas of tourism and affluence) has merely trickled into the Lower 9th Ward. And many of those properties described in Rich’s article actually belong to the City of New Orleans, not the residents.

To add insult to injury, there isn’t a day that goes by when I don’t see a tour bus riding through the neighborhood. So not only are those of us who live in the Lower Ninth not being supported in revitalizing our neighborhood and keeping it from converting back into “Jungleland”, but tour companies are actually making money off our tragedy and lack of support.

Shame on you, Nathaniel Rich. You should’ve used this article to take the city, state and federal government to task.  You had a national audience, a national stage, and you used that golden opportunity to bad-mouth a neighborhood that hasn’t received the proper support and attention it needs to recover. In your own backyard, at that. You are a New Orleanian, man!

Furthermore, you completely ignored organizations that are working hard (and are largely unsupported by the City) to do positive work here.  You mention Brad Pitt’s Make It Right organization as the only silver lining on the dark cloud that is the Lower 9th Ward. What about Common Ground Relief, lowernine.org (which you only mention in reference to Lower 9th Ward tours) and the Lower 9th Ward Neighborhood Empowerment Network Association (NENA) who have been helping Lower 9th Ward residents to rebuild their homes since Katrina?  What about the Lower 9th Ward Center for Sustainable Engagement and Development (CSED) which has been organizing volunteers to help homeowners and providing services to help them rebuild sustainably? I wonder how extensive your basic research for this article was, Nathaniel.

What about my own organization, Backyard Gardeners Network, which has been organizing neighbors together to re-connect with one another and the land using our cultural tradition of growing vegetables? What about Sankofa Community Development Corporation? What about the efforts of All Congregations Together (ACT) and A Community Voice? What about All Souls Church and Community Center and the Lower 9th Ward Village Community Center? They may not have the clout and financial power of Brad Pitt, but they are here. These are groups that actually NEED national attention to garner support and resources to continue the work. Yet you used this opportunity to highlight an organization that already has all the support it needs. You talk more about the variety of plant and animal life that have moved in, than the PEOPLE who have moved back to revitalize this neighborhood.

Before you judge us, think about why these lots are empty in the first place. Before Katrina, nearly 15.000 people lived here and, with a higher homeownership rate than anywhere else in the city, most owned their homes. The overwhelming majority of these homeowners were Black. As the foreclosure crisis around the country has taught us, homeowners don’t just casually walk away from their properties. That’s what renters are more likely to do.

Seventy-five percent of the population didn’t return because staying where they had evacuated became far easier than the fight (and expense) it would take to come back and rebuild. It should be noted that many families did actually rebuild and are still rebuilding, and they received very little support to do so. Without the support of the various nonprofits and thousands of volunteers that have helped, more of the Lower 9th Ward might actually be “Jungleland.”

The biggest setback probably had to be that this community started with fewer resources to rebuild. This was no coincidence. The reasons are numerous, but it is well documented that much has been due to legal, well-enforced historical and structural racism that still deeply affects us today. For centuries, people of African descent all over the country, but especially in the South, were generally prevented by law and custom from gaining wealth, education, and basic human rights. If you don’t have much money start with, how do you recoup your losses when tragedy strikes? Many Lower 9th Ward residents didn’t have homeowners and flood insurance. Additionally, the Road Home program, which was supposed to be a lifeline to those displaced after Hurricane Katrina, doled out payments to homeowners based on pre-Katrina property value, and NOT cost of repair. With this scenario, people who owned homes in more affluent neighborhoods (usually White) got larger sums of money to repair less damaged homes than people who owned homes in neighborhoods like the Lower 9th Ward (usually Black). A lawsuit against the U.S. Department of Housing and Urban Development (HUD) alleging these discriminatory practices was settled last year, with HUD paying $62 million to Louisiana homeowners. [I don't know anyone who got that money. Anyway, the damage is done.]

The second biggest setback was that the City prevented the rebuilding efforts of Lower 9th Ward residents. Community members were not allowed to return home and start rebuilding a full nine months after other New Orleans citizens were allowed to return. Think about what could happen in nine months. Not being able to return home – and facing increased uncertainty, chaos and financial burden – for a much longer time, people had to get jobs and re-settle in their evacuation locations.

The third biggest setback was the lack of basic amenities in and near the neighborhood after Katrina. Many elderly were concerned about where they would get healthcare. Many parents were concerned about where they would send their children to school. [Thank goodness that Martin Luther King Charter School fought so hard to re-open. There would be no other public school option in this neighborhood]  This neighborhood STILL does not have a grocery store. Almost seven years after Katrina, and we’re still dealing with economic blight. The original master plan actually had the Lower 9th Ward slated to be green space!!

Underlying all these setbacks, and deeply intertwined with the aforementioned historic and systemic racism, is the general lack of support from the city, state and federal government to help displaced residents to return. The City could very well provide more support to this community. Perhaps it wasn't/isn't profitable, but it is what's right. Lower 9th Ward lives are just as valuable as the lives of French Quarter or Garden District residents.

Now that Mayor Landrieu is in office, we’ll see what developments take place. I can attest that we’ve had more street repairs in the Lower 9th Ward than ever before (since Katrina). But that’s where it ends for now. I’ve heard promises and seen plans, but the Lower 9th Ward as a community is naturally skeptical. We have become used to broken promises. So we don’t hold our breaths anymore. We don’t get excited anymore. We wait and see.

The French Quarter survived relatively unscathed because it is an affluent tourist area for whites. If the Lower 9th Ward was such an area, there is no way anything as potentially destructive as a barge would’ve been allowed to remain untethered in waters with a storm coming. There is no way the levees wouldn’t have been built to withstand a category 4 storm. It isn’t because the French Quarter is 9 feet higher than the back section of the Lower 9th Ward, as implied in the Jungleland article (keep in mind that the area south of St. Claude Avenue in the Lower 9th Ward did not flood at all during the last disastrous storm, Hurricane Betsy, in 1965). It’s because of racism and classism, which usually go hand in hand.

Sorry, Nate, but you missed the mark. You may have intended to highlight a bad situation in order to somehow help us. But you could’ve done better.  When outsiders come in and cover what they think are the sexy stories of an overgrown jungle, they should dig a little deeper. Go back to the journalistic basics: who, what, where, when and most of all, why. For every vegetation covered lot, there is a story, and much of the story is hard working people trying to make the historic Lower 9thWard whole again.

Listed below are links to weblogs that reference "Jungleland", Really? A Lower 9th Ward Response: