Connect the 9: Bridging St. Claude for All Users (PRESENTATION) 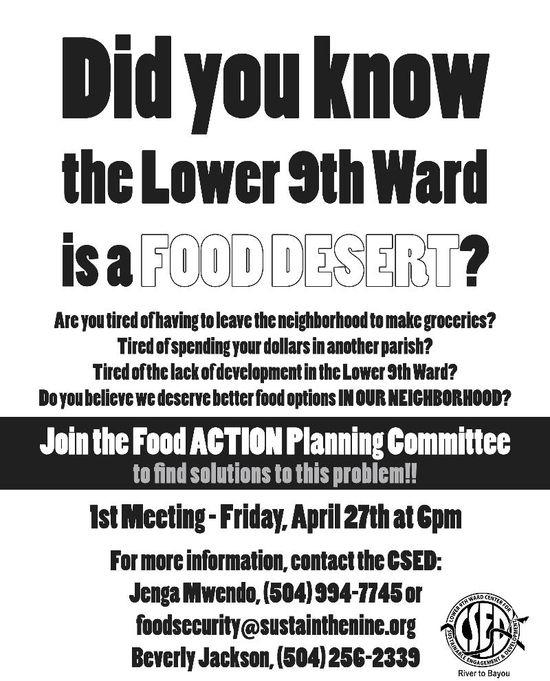 Connect the 9! Improving Access Across the St. Claude Bridge (VIDEO)

On Tuesday, CSED appeared before the New Orleans City Council Transportation Committee to improve bike and pedestrian access across the St. Claude Bridge. Dr. Earthea Nance and University of New Orleans students presented their project, "Connect the 9", on much-needed transportation alternatives on behalf of the St. Claude Bridge Safety and Access Committee (working in conjunction with the Lower 9 Center for Sustainable Engagement and Development).

Dr. Nance is a member of CSED's Board of Directors; David Eber, our Resiliency Coordinator, also spoke to the council. Great job everyone!

Bike to Work - and Everywhere Else!

With the mayor's NOLA Bike to Work Day yesterday, we think this is a good time to highlight some of the many bike routes and bike lanes available throughout New Orleans - including along St. Claude and Chartres in the Lower 9! (courtesy The Times-Picayune) 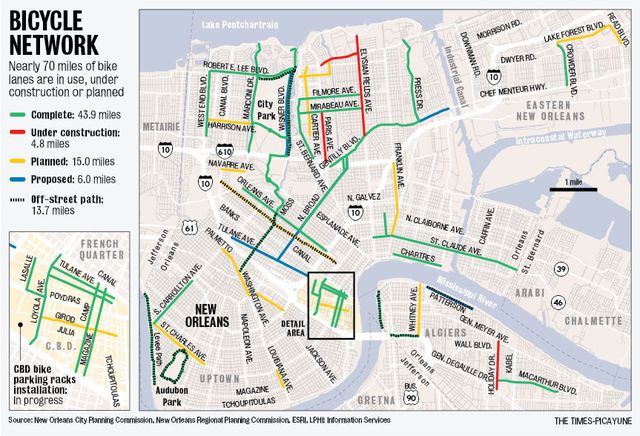 Atlantic Cities: What Cities Looking to Shrink Can Learn From New Orleans

Very interesting essay in The Atlantic Cities. Seems the NY Times Magazine article, "Jungleland", has stirred up a lot of passion as part of the national debate on recovery and rebuilding in the Lower Ninth Ward...and that's a good thing. We need the world to see what's really happening here, as well as the major challenges we continue to face.

Unproven theories abound as to how cities with a diminished population might “shrink” their footprint to ease the financial burden of maintaining an infrastructure created to serve a larger city. By moving the few remaining residents out of the most diminished neighborhoods and into under-utilized spaces in healthy areas, the theory goes, the now-smaller city saves money, strengthens neighborhoods worth saving and prepares for a better future.

‘Unproven’ is the operative word here. History makes plain that if you plan for shrinkage, a city will continue to shrink, not grow stronger.

Today, one community exemplifies both the consequences and costs of shrinkage and the regeneration path of incremental but veritable re-growth.

That singular place is the Lower Ninth Ward of New Orleans. After Hurricane Katrina, skeptics assumed the worst. Officially, the city did not turn its back on the working-class neighborhood of the Lower Ninth, but few dollars and little energy have been expended there. Residents will tell you that there was not much in the way of city services to shrink.

A recent New York Times Magazine article, “Jungleland,” offered an exaggerated look at what’s happened since to the acres of vacant land in the once heavily populated working class neighborhood. The impression is one of an almost primeval forest taking over. The author ignored blocks of rebuilt houses and clusters of homes scattered among the overgrown lots. But he did highlight the inevitable consequences of the removal of city services: piles of broken up concrete and construction debris, discarded sofas, bags of garbage, toilets, a burnt car and lots of tires are randomly dumped, costs that are inevitable in even a semi-shrunk area. Considerable acreage is reverting to unkempt nature.

But the Lower Ninth Ward is also growing again slowly. Residents have defied expectations and expert predictions and are re-staking their claim. READ MORE >>

WBOK's Crosstown Conversations: On "Jungleland" & the Real Story of the Lower 9th Ward

Crosstown Conversations, on WBOK 1230 AM with host Jeanne Nathan, tries to set the record straight on Nathaniel Rich's NY Times Magazine cover story, "Jungleland" – along with the real progress and many challenges that remain – during the March 29 show.

Missed the show? Listen by clicking on the link : March 29

Restoring the Bayou: One Day, One Plant at a Time Students from the University of Wisconsin planting Spartina Grasses along the Bayou Bienvenue spoil bank in the Lower 9th Ward.

The past two days at Bayou Bienvenue have featured a flurry of activity with Common Ground Relief, the CSED, the Sierra Club and volunteers from the University of Wisconsin who have been removing invasive species of plants, and planting native ones, on the spoil bank in Bayou Bienvenue.  Along with removing the invasives, the volunteers removed trash and planted 250 Bald Tupelo Cypress saplings, and transplanted some Spartina.

While this work is slow, it is important for the ecological health of the bayou. Also, it makes for a fun outing and experiment!