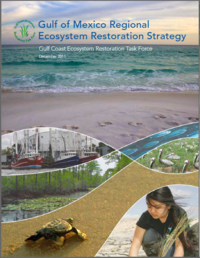 The Gulf Coast Ecosystem Restoration Task Force has released its final strategy (PDF) for long term ecosystem restoration for the Gulf Coast, following extensive feedback from citizens throughout the region. EPA Administrator and Task Force Chair Lisa P. Jackson, joined by National Oceanic and Atmospheric Administration Administrator Jane Lubchenco, Council on Environmental Quality Chair Nancy Sutley, and USDA Under Secretary for Natural Resources and Environment Harris Sherman, made the announcement today during keynote remarks at the 2011 State of the Gulf of Mexico Summit in Houston.

The Task Force delivered the final strategy on Friday, Dec. 2 to President Barack Obama, who established the Task Force by executive order to continue the Administration’s ongoing commitment to the Gulf region.

The strategy is the first restoration blueprint ever developed for the Gulf with the full involvement of all of the essential parties throughout the region, including the states, tribes, federal agencies, local governments and thousands of involved citizens and organizations.  The plan represents a commitment by all parties to continue to work together in an unprecedented collaboration to prepare the Gulf region to transition from response to recovery and address the decades-long decline that the Gulf’s ecosystem has endured. READ MORE >>